My husband and I were at a small junction near the north coast of Northern Ireland and had two choices. We could either take

the larger, busier road labeled “Coastal Route” or we could turn off onto a small road going up a steep hill. My navigation device showed me that the smaller road would allow us to cycle closer to the sea’s coast. That’s what settled it for us. We took the smaller road.

Immediately we were lurched into a long series of steep, hilly cycling battles. Cycling downhill was almost more challenging than cycling uphill. The downhill gradients were so steep that it felt like the bike might do a somersault and tumble down the rest of the hill. One uphill climb was so steep and so long that I had to stop to catch my breath. Once I was breathing normally again, I discovered it was impossible for me to continue cycling up the hill. When I tried to put both feet on the pedals, I lost balance. I struggled to pull the bike upwards until I found a gradient that would allow me to get back on.

I had cycled on very steep hills before. These reminded me of that time in France, a few months earlier, when my navigation system and me had a little misunderstanding that resulted in a huge detour up a big, steep mountain.

I knew I could do this. I knew I even enjoyed it. There is a very primal sort of satisfaction that I find in putting every single ounce of energy I have into the movement of my legs. It’s an enjoyable pain. That sounds almost masochistic. It’s not.

We cycled up and down, both of us letting out a very loud “Ahhhhhhhhhh!” when we reached the steepest part of a hill, perhaps thus allowing our own voices to push our legs up that last bit. I have no idea how much time passed at first. It could have been five minutes. It could also have been 30 minutes. And then we saw the coast.

I don’t care how many times I have seen coasts. It doesn’t matter how long it has taken me to reach them: weeks, days, or hours.

Every single time I reach a coast by the power of my own two legs I am spellbound. It is as if I am seeing it for the very first time. It is an almost childlike sensation of awe. END_OF_DOCUMENT_TOKEN_TO_BE_REPLACED

I had it all planned out in my head. Today’s blog post would be titled, “Vive la France!”

with an exclamation point at the end, of course. When I saw the sign indicating I was crossing into France, I might give a little cry with tears then right about it in the post, then I’d take a picture of the sign and post it too, with me feeling all glorious and triumphant.

But Spain was having none of it and neither was France.

I always check the weather reports the night before and the morning of a cycle. Always. I want to know what to expect; partly to know what to wear and partly because if I know to expect bad weather I’m mentally prepared for it.

I checked the weather reports as always for Girona, Spain, my starting point, and Perpignan, France, my destination for the day. Both cities were to have partially cloudy mornings and it would drizzle in the afternoon in Perpignan. I’d want to try to get there early, I thought. Might as well avoid the drizzle if I can. I also checked the wind. I could have sworn I checked both cities and that they both had very minimal wind today. I was relieved. I now suspect that I checked the wind in Girona only. END_OF_DOCUMENT_TOKEN_TO_BE_REPLACED 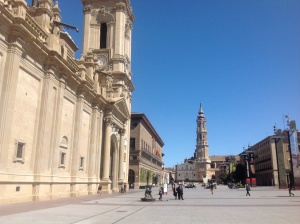 started cycling. I’ve had maybe one or two days of what I would consider comfortable weather. I’ve cycled in searing heat, pouring rain, and misty cold. Today I got gusty 29mph winds. On the autovia! I’ve learned my lesson. I’m not cycling on motorways again. It was frickin’ scary. The wind pushed me against the guardrail twice. It was so windy I had to get off my bike and walk twice – on the frickin’ motorway! – and the wind was still pushing me against the guardrail. Then when big trucks passed by I had even less control because their wind pushes me around too. Seriously never again. I don’t care if cycling on the motorway in Spain is potentially legal. It’s not for me.

I did get into Zaragoza with enough time to spare for a quick visit of the city. It’s probably the largest I’ve been to so far and is full of university students. The old part of the town, although small compared to others, is beautiful.

I’m in a hotel again. I planned to camp tonight, but when I went to the camp they gave me a cement plot that was impossible to stake a tent to. The bathroom near the grassy plots, they told me when I went back to tell them it wouldn’t work, wasn’t open. It was a great excuse for me to ask for my money back and look for a hotel. It was too cold and windy and there wasn’t anywhere other than the tent for me to take shelter. So much for budget travel. That’s pretty much been flushed down the toilet.

Almost every single time I start thinking about beginning my semi-daily exercise routine I feel dread. But I’ve never once regretted

Hiking in the Cinque Terre, Italy

Don’t get me wrong. Sometimes when I start exercising or when I go to the gym, I feel like giving up in the middle of it all. Sometimes I do the easier exercises rather than the more difficult ones. Sometimes in gym class I’ll be so tired that I do things at half the pace as everyone else. And a couple of times I’ve started an activity and I’ve just completely given up after a few minutes. But that’s only happened when I’ve chosen to do something I’m completely unprepared to do.

My journey with exercise has been just that: a long and arduous journey. It’s taken me years to understand my body, its limitations, how far I can push it, and when I just need to rest. It’s taken me years to get myself into a mindset of exercising as regularly as I can, no matter where I am, and no matter what facilities are available to me. The one thing that has convinced me most to keep pushing forward is that I want to be fit enough to enjoy my life and to do fun and exciting things. END_OF_DOCUMENT_TOKEN_TO_BE_REPLACED