This morning I woke up to find several of my Facebook friends sharing an Arabs Got Talent video. I’ve 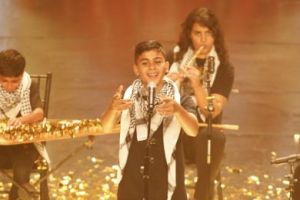 never properly watched the show nor have I cared to. But just as I’ll click on a link to a video that any friend recommends as interesting or funny, I’ll click on a shared Arabs Got Talent video every now and then too. So I clicked on this one to see what all the fuss was about.

It was a musical group of young Palestinian children from Gaza. They trained through the recent Gaza bombings. There were days on end when they couldn’t go to school but they would train as a group nevertheless. They described how difficult it is for them to see all the destruction in Gaza as they make their way to their institute to train. They tried several times to get out of Gaza to participate in the show but they couldn’t. The border with Egypt, the only way out, is often closed. But they eventually managed to get themselves across the border, onto a plane from Cairo Airport, and into Lebanon for the auditions. “We want to show the world that there is talent in Palestine,” said the youngest of the group. The group was composed of one singer and four children on musical instruments. The singer, probably around 13-years-old, had the hugest smile on his face throughout the whole audition. They played and sang a song by legendary Lebanese singer/songwriter Wadih El Safi (1921-2013) about the return of a loved one; the implied message in this particular case being one of singing for the return of Palestine. The children played and sang the song beautifully. The judges were all very impressed; so much so that one of them, a Saudi comedian, pressed the golden button that allows them an automatic go-through to the next rounds. Gold confetti dropped all over them as they continued singing the song to its end, with the youngest player on the classical Arabian instrument, the zither, crying tears of joy.

I always have a good cry when I see people accomplishing their dreams. So it isn’t strange that I had a really good cry while watching this video. But this time was different because of the context of the past few days. I’ve had a very deep-sitting feeling of loneliness and frustration since the Charlie Hebdo attacks. I feel as if I’m not understood – by hardly anyone. I feel like I want to sit the people of the world down in front of me and slowly explain to them why it is that we’ve reached the situation we’re now in. I want to tell the Western powers-that-be what they have been doing and continue to be doing wrong. I want to tell my fellow Muslims what they have been doing and continue to be doing wrong. It’s all so clear in my head but because there are so many intermingled and complex reasons for it all, they get jumbled in the area just before my throat so that it feels like it all just comes out in a putrid spew of vomit. I can’t seem to find the energy or the willpower to put together a proper, evidence-based argument to be able to clarify things the way I see them. END_OF_DOCUMENT_TOKEN_TO_BE_REPLACED