The fact that I’ve lived now for over 20 years in a city as crowded as Cairo, Egypt makes me very conscious of the concept and importance of space. To get from one part of Cairo to another one moves literally sometimes at a crawling pace as streets have become over-burdened with more cars than the city can handle. Egyptians have a very small space bubble. We hug and kiss almost everyone we greet, we hold hands as we talk to each other, we throw ourselves into crowded markets and bazaars with the same excited feeling we have when we jump into a swimming pool. Our apartment buildings are packed one right beside the other and our apartments one atop of the other. Open any window and you can easily hold a conversation with the person living on the same floor across the street.

It is this constant awareness of space that gave me pause for reflection while visiting the Perimeter Institute for Theoretical Physics in Waterloo, Canada.

The Perimeter Institute (PI) specializes in cross-disciplinary research in cosmology, particle physics, quantum foundations, quantum gravity, quantum information theory and string theory. One day I’ll figure out what all that means. But for now, as I went on a guided tour through the Institute I was fascinated by the way space was designed to maximize researchers’ opportunities to think, be creative, and to interact with one another.

Draw a line under the word “cross-disciplinary”. After years of scientists

living in the micro-cosmos of their ultra-specialized fields, they are now realizing more and more how important it is for science to reach across disciplines. Our realm of knowledge cannot grow and develop and mature unless scientists from different disciplines work with each other, share what they know and build on that shared knowledge.

PI is bringing theoretical physicists to Canada from all over the world to share the knowledge of their different disciplines in order to solve some of the most complicated questions about our micro- and macro-universes. Their ambitious plan is to eventually house the largest concentration of theoretical physicists anywhere in the world.

creativity and collaborations to happen. The magnificence of architectural design starts in the office. One of each researcher’s four office walls is a window that peers out onto the world beyond. Perimeter itself is surrounded by relatively open space so that researchers see earth and grass and trees and water and the buildings of the town beyond. A second of the office’s four walls is a blackboard or a whiteboard. There was not one office that did not have one of these, full of what my eye sees as endless scribbles but what I’m sure are most probably complex equations. 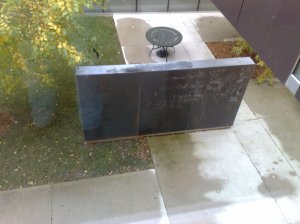 find cozy lounge areas with leather couches, a refreshment booth, and yes, a huge blackboard full of scientists’ doodles. On the third floor scientists can walk out onto a veranda that seemingly projects itself from this black-mirrored building and seamlessly hangs over the green below. The veranda is lined by wooden benches and smack in the middle is a blackboard that scientists can use on both sides. Part of the building also surrounds a ground-floor garden that one can see from any of the multitude of glass walls in the building’s hallways. And what does one find right beside the bushes, their leaves a brownish green as autumn draws to a close? A huge blackboard, probably 2 x 3 meters large.

These areas are designed to encourage scientists to leave their offices and lounge with colleagues from their own and other disciplines. In one lounge area, scientists can drink coffee, play pool, and either chat about their 10-year-old’s crush on the girl at school or idly discuss their latest thoughts on loop quantum gravity, cosmic acceleration, and black rings and then suddenly jump to the blackboard as their conversation progresses to some stroke of genius thinking.

I see this and heart-wrenchingly remember a recent visit I made to Cairo University’s Faculty of Science. There’s not much to see really other than dark, moldy labs full of dusty, cracked equipment to a large degree from the 1960s. Even when the equipment is more recent, it’s still placed in the dark, moldy labs. Think grave and you sort of get the idea of the environment Egyptian scientists have to work in.

Scientists need knowledge, equipment, labs, and grants in order to be productive. But today I’ve learned something else. Scientists also need light and space to think creatively and they need each other to take the science to new frontiers.