Tens of thousands – perhaps millions even – of Egyptians took to the streets once more yesterday, June 30, 2013. Some claim yesterday’s protests were the largest in human history.

I was not among them. Neither were most of my close friends and family, all of whom participated in the January 25 Revolution.

I have spent months following what has been happening in Egypt and, like so many others, perhaps the majority of Egyptians, I have been getting increasingly frustrated with Morsi and the ruling Muslim Brotherhood.

Their performance in parliament before its dissolution, along with other Islamists, was abysmal. They were unorganized, they failed to focus their attentions where they were most needed, and there was almost a complete lack of a participatory spirit with the rest of the country. They wanted things done a certain way and that was what they were going to do.

Of course, this is what ruling parties do all over the world, not only in Egypt. The difference in our case is that we are in a process of establishing the ground rules for Egyptian democracy. For this process to be successful, all elements of Egyptian society must participate and have a voice. Islamists did everything in their power to dampen or even stifle that voice.

I did not want a Muslim Brotherhood president. END_OF_DOCUMENT_TOKEN_TO_BE_REPLACED

I almost feel obligated to write the requisite “January 25 2nd Anniversary Blog Post”. I’ve been thinking about this for the past few days: what do I write and how do I really feel? All I’ve been getting back from the Little Man in My Head is, “blah” and sounds of someone on the verge of vomiting.

I often think about those 18 days, the hardships we faced, the fun times we had, and the accomplishments we achieved. Sitting here in the UK where I’m spending three months, it all seems like something I must have watched in the movies. I no longer hold the same sense of pride and accomplishment I had in the days following February 11. I still believe we did what we had to do. I still believe that Egypt now has a chance for a better future. And I still think it might take a generation or two to happen.

But truth be told, I’ve found myself feeling nostalgic for the days when the majority of Egyptians couldn’t care less about politics. END_OF_DOCUMENT_TOKEN_TO_BE_REPLACED

Below is an article that was meant to be a chapter in a book on the Arab Spring I was told would be published by Columbia University Press. The editor was asking that we write our chapters on a volunteer basis (no payment would be received in return), which I gladly did. However, sometime later, I was asked to sign a copyright statement that said, “You hereby permit the exclusive use and agree to transfer the copyright of all or portions of your material in the above-referenced Work in all forms and media (now in existence or hereafter invented) including advertising and related promotion throughout the world and in perpetuity. You hereby grant me and Columbia University Press the right to use your name, likeness and biographical details in connection with all uses of the material and you waive the right to inspect or approve such use.” It seemed completely unreasonable for me to sign away all copyrights of this piece while getting nothing in return. The editor and I were unable to reach a mutual agreement and as a result, I now post this article, written in October 2011, on my blog:

October 20, 2011. It is eight months and nine days after a very emotional day, February 11, that ended with me realizing that I had succeeded in toppling a dictator. It sounds very narcissistic, doesn’t it? “I toppled a dictator.” But I’m certain it’s the same feeling shared by millions of other Egyptians who carried their shrouds on their backs and left their homes every day between January 25 and February 11 with a determination they had not known before to change their country for the better. END_OF_DOCUMENT_TOKEN_TO_BE_REPLACED

I left work early yesterday, June 24, just as most everyone in Egypt did. I was concerned that once the election results were announced – regardless who won – it would be 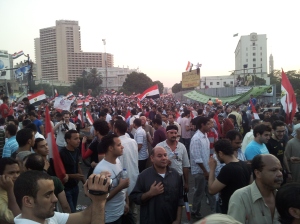 difficult for me to get back home. My work is within five minutes walking distance from Tahrir. I was anxious throughout the drive home. Cairo was going through an intense heat wave. The roads were jam-packed with everyone trying to get home before 3pm when the announcement was due to be televised.

As I inched through Cairo’s traffic, I began worrying that I might not make it home in time to watch the announcement. I turned on the radio to make sure I didn’t miss anything in case I didn’t make it. I also decided that if the announcement was made early or if I didn’t reach home in time, I’d park the car in front of the nearest coffee shop and watch with hundreds of others set to do the same. END_OF_DOCUMENT_TOKEN_TO_BE_REPLACED

The 2012 Egyptian presidential elections are not just any elections. They are the first democratic presidential elections to happen in this country. And they come at a great cost of life and limb from the Egyptian people. There is a lot at stake for Egyptians. Egypt turned over the souls of many of its sons and daughters to their Maker for these elections to happen. Eyes were lost, limbs were broken, and every single person who participated in the revolution risked their lives.

But what is democracy if it is not to give the people the tools with which to dictate which change is most desired by the majority?

Egyptians revolted from January 25 to February 11 and onwards in order to bring democracy to their country. But did they all truly understand what it means to live in a democracy? END_OF_DOCUMENT_TOKEN_TO_BE_REPLACED

As time goes by, post-revolution, I’m beginning to realize more and more that every person who participated in the revolution had different dreams in their heads for Egypt. We all had one shared dream: we wanted to remove Mubarak and his regime. General chants calling for freedom and social justice were common among all. But my concept of freedom and social justice evidently is different from my neighbor’s concept, and his concept is different from the concept of our farmer friend down south.

When I was demonstrating between January 25 and February 11, I was dreaming of a more progressive Egypt. I was dreaming of an Egypt with less corruption, less bureaucracy, more freedom of choice, openness to information and knowledge. I’m surrounded by friends and family who want similar things for Egypt, albeit not always in the same exact way. But the differences between me and my friends and family are differences I can tolerate. They are small differences, not large differences. They are expected differences. When I thought of “democracy”, I thought of democracy between me and my friends. Sometimes I’d be part of the majority on issues and sometimes I’d be part of the minority. Either way, we’d all get along and we’d accept each other and the results of our overall democratic decisions. After all, the differences were always differences I could tolerate.

But I live in my own bubble. Too many of us live in our own bubbles. END_OF_DOCUMENT_TOKEN_TO_BE_REPLACED

On January 25, 2011 around noon, Arwa Salah, Adel Abdel-Ghaffar and I met at a sandwich place in Shubra, a Coptic Christian majority neighborhood in central Cairo. The three of us were very skeptical that the day would amount to much, but being the people that we were, we were willing to give it a chance. We’d all given many chances before. We’d been to protests that amounted to not much more than a few yelling “troublemakers”.  We’d voiced our anger about the state Egypt was in due to a very long dictatorship in a number of forums that were available to each of us. It had always felt like our actions were not much more than a drop into the sea. But we weren’t going to give up. We were going to give it another chance.

What happened over the following days was momentous and quite unexpected by most Egyptians. I don’t think we realized the potential we had as individuals and as a people to create change. Once this realization started dawning on us, we would not allow ourselves to be convinced that we could not take our country out of darkness and into the light.

We would not settle for less than Mubarak stepping down from power. We fully realized that the removal of Mubarak and his regime would create a huge power gap. We fully realized that there was only one power in Egypt besides the National Democratic Party that had any experience and popular support to step into that gap; and that was the Muslim Brotherhood. We were completely aware that once Mubarak and his regime were removed we would be in for trying times. I remember discussions about this going on and on between revolutionaries between January 25 and February 11. I remember saying those words over and over to the various journalists who contacted me for interviews at the time and who repeatedly asked, “But what happens after you remove Mubarak?” END_OF_DOCUMENT_TOKEN_TO_BE_REPLACED

This is a compilation of my tweets (NadiaE)  from January 25 to February 12. Included are some tweets by other people that I retweeted. Retweets can be recognized when a tweet starts with a twitter name other than NadiaE. I felt it was important to include some retweets because they carry part of the story of each day and they indicate what I felt was important while I was tweeting. 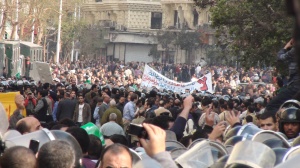 So where’s everyone going for today’s #jan25 demonstrations in Egypt? What is your demo location of choice for today?

Off to the streets of #Cairo with my sneakers on and my camera handy. Won’t be driving car today. Hope taxis are available #jan25

Arwa Salah and I meet up to go to demonstration in the neighborhood of Shobra together. We thought the demonstration in Shobra would be more exciting because of its Christian majority. Egyptian Christians had been staging many demonstrations in recent days due to the New Year’s Eve bombing of a church in Alexandria and the government halting building of a religious complex in Giza.

END_OF_DOCUMENT_TOKEN_TO_BE_REPLACED

Mubarak has stepped down! Egypt is Free! The Egyptian people have succeeded in bringing down Mubarak, and have conquered their fear. They now need to build a new Egypt.

During this revolution, I’ve been following a Tweeter in Egypt named Nadia El-Awady. Nadia is an Egyptian science journalist. Her tweets have given me an insight into that revolution which is much deeper (and even funnier) than what the news media can give.

To read the full post in Carlo’s Think Pieces: Reflections of a Filipino in the Netherlands http://butalidnl.wordpress.com/2011/02/11/the-egyptian-revolution-from-nadias-eyes/

I was deeply touched by this post. Thank you, whoever you are.