We haven’t yet discussed the bug situation. 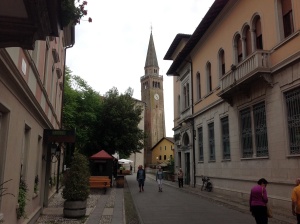 I’m starting to think Italians have a thing about leaning towers. The Duomo in Portogruaro.

You know how when you’re driving, insects manage to smash themselves in your windshield sometimes? Or how flying geese smash into the windshields of planes? Same thing happens while cycling. Except that it’s all kinds of flying bugs smashing into your face. And if you’re wearing sunscreen, like I do, they stick. Or if you’re breathing with your mouth open, they fly inside. I had a paroxysm of coughing today while cycling because a bug went straight into my windpipe. Sometimes they fly right between the openings in your helmet into your hair. Because I’m camping sometimes on this trip, I’m getting a double dose of bugs. I have to admit I’ve come to like the little critters. They are my company since I’m all alone these days. We’ve figured out how to get along with each other.

In Spain, everywhere I cycled I saw so many little creatures crossing the roads. I would

think that if drivers knew what was happening under their tires, they wouldn’t be driving at all. I was constantly swerving to avoid killing bugs and caterpillars. I haven’t seen many bugs on the roads in Italy, though. I wonder if Italian bugs just have more “street smarts” than Spanish bugs by avoiding roads altogether.

I had another road sign situation today. I was cycling out of Treviso and heading towards Portogruaro. The signs said while still inside Treviso that Oderzo, a town en route to Portogruaro, was 24km away and that Portogruaro was 54km away. I thought that was perfect. I’d have a short cycling day again. Couldn’t ask for better. But as I cycled towards Oderzo and got nearer to it, eventually seeing a sign that said it was 19km away, Portogruaro was moving away from me no matter how hard I tried to get closer. When Oderzo was 19km away, Portogruaro was STILL 54km away. It seems that I eventually was able to pick up enough speed to be faster than Portogruaro. It was actually 65km away from Treviso. END_OF_DOCUMENT_TOKEN_TO_BE_REPLACED