Strip a people of all freedoms. Take their land, kill their children and their loved ones, control their livelihoods, and prevent free 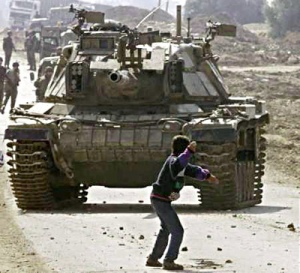 Then dictate to the occupied people the ethics of resistance.

Better yet, give them a list of the forms of resistance that are not allowed. Label those forms as terrorism. Do not tell them what you might consider to be “acceptable” resistance. Imply that non-violent compliance in the face of the complete annihilation of their civilization is the only form of resistance acceptable.

Go to the movies. Cheer along as Hollywood glorifies American resistance fighters as they combat alien invaders, apes, and sometimes other humans. Then come home, turn on the television, and listen to American commentators and analysts deny the aforementioned occupied peoples, living under the worst conditions known to the human race, their right to resist.

Terrorize anyone who shows support to the occupied people. Label them. Demonize them. Threaten them. Call them terrorists and terrorist supporters.

Let’s you and I, sitting safely in our homes cuddling our children happily in our laps, discuss the ethics of resistance.

And let us not mention, once, the “ethics” of aggression and occupation.