Part I: The Training

When my husband first told me that he was thinking of getting a few guys from the office together to cycle from London to Paris, my 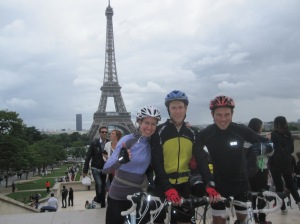 Andrew, Colin, and Nadia after three days of cycling from London to Paris. We made it!

first thought was, “Who does crazy stuff like that?” The words that came out of my mouth were, “Can I join?”

I hardly had any experience cycling but that was not going to hold me back. I bought a cheap mountain bike in Egypt just before I climbed Kilimanjaro in 2009. I cycled a few times in Cairo as part of my training for the climb. That training consisted of leisurely cycling on flat road for no longer than half an hour at a time. I did not think it was leisurely then, of course. I now know what real training means. END_OF_DOCUMENT_TOKEN_TO_BE_REPLACED

My earliest memory, beyond false memories that can sometimes be induced whilst looking at old photographs, is from the time when I was four years old.

My father was teaching at the University of Cambridge in England for a year. One night, while I was sleeping, I woke up to the sound of footsteps coming up the staircase. They were slow, purposeful footsteps; the scary kind like in horror movies. They were footsteps that were out to get you. I froze. My back was to the bedroom door and I could not turn around to see who it was. So the thing came to me. It walked into my room, around my bed, and stood right in front of me. It was the apparition of a 40ish woman. She was transparent (as ghosts tend to be). Her hair was held up high on her head in a bun (I can’t remember the birth dates of my own children but I remember that). She looked me straight in the eyes and said, “You killed my daughter!”

My heart stopped. I knew exactly what she was talking about. The electricity cut off just as ghost lady was starting up the stairs. As the nightlight went off in my room, and just as my eyes were getting accustomed to the dark, I saw a wisp of little girl disappear underneath my bed. In my head I figured that’s what happened when there is a power cut: little ghost girls die and hide underneath alive girls’ beds.

Once I realized that I had something to do with the death of a ghost child (I still had no real idea how I had anything to do with the power cut) and her mother was standing in front of my bed looking for retribution, I shrieked, “Mooooooommy!” My mother came into my room, sat next to me on my bed, took me into her arms, and asked me what was wrong. I told her what had happened. She chuckled and told me I must have had a bad dream. Mothers! She lit a candle and led me from my room to my parents’ room. I could sleep in their bed until the electricity came back.

I have never stopped wondering what really happened that cold, damp British night some 40 years ago.