My husband and I were at a small junction near the north coast of Northern Ireland and had two choices. We could either take

the larger, busier road labeled “Coastal Route” or we could turn off onto a small road going up a steep hill. My navigation device showed me that the smaller road would allow us to cycle closer to the sea’s coast. That’s what settled it for us. We took the smaller road.

Immediately we were lurched into a long series of steep, hilly cycling battles. Cycling downhill was almost more challenging than cycling uphill. The downhill gradients were so steep that it felt like the bike might do a somersault and tumble down the rest of the hill. One uphill climb was so steep and so long that I had to stop to catch my breath. Once I was breathing normally again, I discovered it was impossible for me to continue cycling up the hill. When I tried to put both feet on the pedals, I lost balance. I struggled to pull the bike upwards until I found a gradient that would allow me to get back on.

I had cycled on very steep hills before. These reminded me of that time in France, a few months earlier, when my navigation system and me had a little misunderstanding that resulted in a huge detour up a big, steep mountain.

I knew I could do this. I knew I even enjoyed it. There is a very primal sort of satisfaction that I find in putting every single ounce of energy I have into the movement of my legs. It’s an enjoyable pain. That sounds almost masochistic. It’s not.

We cycled up and down, both of us letting out a very loud “Ahhhhhhhhhh!” when we reached the steepest part of a hill, perhaps thus allowing our own voices to push our legs up that last bit. I have no idea how much time passed at first. It could have been five minutes. It could also have been 30 minutes. And then we saw the coast.

I don’t care how many times I have seen coasts. It doesn’t matter how long it has taken me to reach them: weeks, days, or hours. 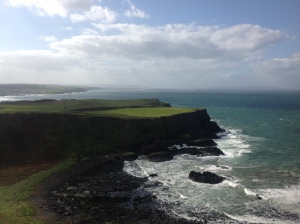 Every single time I reach a coast by the power of my own two legs I am spellbound. It is as if I am seeing it for the very first time. It is an almost childlike sensation of awe. END_OF_DOCUMENT_TOKEN_TO_BE_REPLACED