When you start wondering whether it’s better to be treated in Egypt rather than in the UK, it might be time for the British healthcare system to undergo a revolution.

At the end of last month, a Guardian link appeared in my Facebook feed that immediately touched a 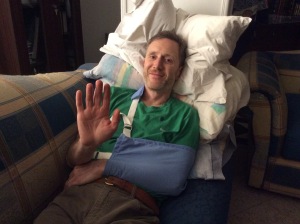 nerve. In an article titled “The doctor won’t see you now”, Victoria Coren Mitchell wrote about her difficulties in gaining access to her GP.

As a newcomer to the UK, I have had my own, admittedly different, issues with getting the kind of medical attention I believe I need when I need it. I made a comment to that effect on the Guardian’s Facebook post of Mitchell’s article and was taken aback by some of the responses I received from readers. “You still got time change your mind and go back to where you came from,” was one type of comment. A couple of others told me that GPs knew better than me whether I need a referral to a consultant. My comment was about my complete and utter inability to get a referral from my GPs to see a consultant about a condition I had they were unable to treat.

Although very frustrating for me, the condition I was talking about was a chronic skin condition I have had for years. I had seen several doctors over the years in Egypt, where I’m from, who were also unable to properly diagnose and treat me. My misplaced optimism that I might finally resolve the issue by visiting a British doctor is not the biggest of deals. I’ve had the condition for years. I can continue to live with it if I must. Or the next time I’m in Egypt I can easily schedule an appointment with another top-notch dermatologist and hope I might get somewhere.

I convinced myself that because my condition was not urgent or life threatening, it was all right if it was not treated. I had made three different visits about my condition to three different GPs in my local surgery to no avail. All three refused to refer me to a consultant until I tried their suggested treatment, none of which worked, and I completely gave up going a fourth time. Because of this experience and another, I no longer visit the GP with anything that I think can be delayed or ignored; a dangerous thing for anyone to decide. Despite all this, I still believed that getting access to the right doctors in the UK would not be an issue with more serious conditions.

That is until my British-born-and-bred husband, a Caucasian Scot (according to the comments made to me by some Brits on Facebook, this distinction seems to be important), fell off a horse and broke his collarbone while we were on holiday in Egypt. END_OF_DOCUMENT_TOKEN_TO_BE_REPLACED