Ever since I was a little girl…

…is NOT where the story of this next grand adventure begins.

In fact, I can think of only one grand adventure of mine (which happened not to be sport or activity related) that originated in my childhood. I’m constantly coming up with new dreams and new ideas for adventures. 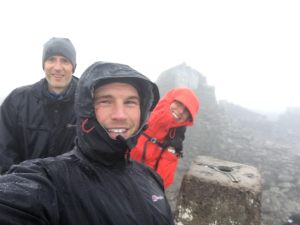 I’m not sure which mountain this was taken on. The backgrounds in our pictures on all three summits are almost identical. Let’s just say it was bleak.

Ever since about four years ago when I first heard of the UK’s national three-peaks challenge, I’ve wanted to give it a go.

I have no idea who thought of this idea or when. I’m not even going to look it up to tell you about it because to me, that part is irrelevant. The national three-peaks challenge is about hiking up the three highest mountains in Scotland, England and Wales in a period of 24 hours.

It’s not an official race. There are no official times. There aren’t marshals or registration forms. There’s no one to announce you’ve accomplished the task. There are no certificates at the end or event T-shirts. There isn’t a specific day to do it, although I hear throngs of people choose to do it on June 21, the longest day of the year.

You just go out and do it.

I’ve been nagging my husband ever since I heard of this being “a thing” that we go and do it ourselves. He had already done it twice. He wasn’t enthusiastic in any way to do it a third time. I couldn’t understand why. My husband is huge on physical activities and challenges. But after four years of nagging and an opportune relatively free summer, he obliged.

He put together a team of five. It’s better to have a few people with you because the challenge involves an incredible amount of driving. Only days before our set date, two of the five pulled out, leaving us with a small team of three: me, my husband, and one of his work colleagues who also, it just so happens, was our third team member on our grand cycle from London to Paris in three days only three years ago.

I knew the national three-peaks challenge would be challenging. It wouldn’t be called a challenge otherwise. END_OF_DOCUMENT_TOKEN_TO_BE_REPLACED