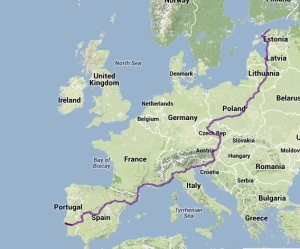 The route I took to cycle across Europe from its southwestern to its northeastern point.

Tent laid out to dry: check

Bikes still disassembled in their boxes and tidily placed in the garage: check

Camping gear placed in its special bag in garage: check

Watch Come Dine With Me, the Jeremy Kyle Show, and Big Brother (in other words, all the crap British TV there is to watch): check

My husband and I stepped onto a RyanAir plane in Estonia to head back to our home in the UK last Monday afternoon. We had just spent a very lazy and relaxing two days in Tallinn, much of it sleeping and some of it walking around the enchanting old town and the city port. The highlight for me was the food. Those Estonians really know how to eat! I had a most amazing omelette my first morning in Tallinn. Who says that about an omelette? But that one was special. It had huge chunks of red onion, tomato, and mushrooms in it. I hogged down the special Estonian black bread with almost every meal. I had duck breast one evening and lamb on another. It was a great opportunity for us to recover before heading home.

Since I returned to the UK, I’ve kept myself busy washing, tidying, resting, watching crap TV, and gathering GPS data from the trip. It’s been nice. I was worried that I would have a bit of a culture shock coming back. I had settled into a nice cycling routine while in mainland Europe. I was enjoying having something to be involved in that I was passionate about. But by the time the trip ended I was ready to come home. I have a few things coming up that will keep me occupied over the next few weeks, including the Muslim month of fasting, Ramadan. So I should be all right, at least for awhile.

During the trip, I was incapable of looking back at what I had done or looking forward at what still remained. I found that if I 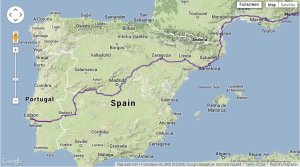 tried, I was overwhelmed with the immensity of both. As a result, I found myself, with no physical or emotional effort on my part, living in the moment. While I was cycling, my focus was on keeping myself safe and getting through the next ten kilometers. When a day was finished, my focus was on getting a shower, eating, writing my daily blog diary, and getting some rest. The following morning, my focus was on understanding the route I would be taking for the next few hours.

On my last day of cycling in Estonia, I thought that the gates to all the memories of the past two months would come rushing at me the moment the trip ended in Tallinn. Instead, I somehow managed to keep those gates closed. I wasn’t ready to deal with the emotions that would come with the collective memory.

It is easy for me to think back and remember a particularly difficult day, a moment of happiness, or the pre-cycling anxieties that hit me in the first many days. But I can only take in such memories piecemeal. I can’t put them all together in my head as belonging to one single journey. I also find it extremely difficult to contemplate the distance I cycled from beginning to end. I am aware of it. But I can’t think about it. Something inside of me tells me to keep a lid on the thoughts, for they might bring me emotions I am incapable of dealing with.

So when my husband and I finally arrived into the center of Tallinn, I was happy, but my main feeling was one of being tired. I 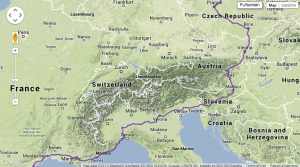 just wanted to find a place to stay for the night. While we were still in Tallinn the following two days, I was focused on being a lazy tourist. When we packed to come home, I was focused on getting the job done. When we got home, my focus was on getting settled. My mother-in-law told me in a quick phone call that I must feel very proud. “I feel relieved,” was my response. To feel proud would mean looking back at the whole of what I had done. I don’t think I can do that yet.

Nevertheless, I found myself wondering the other night what I would consider to be the highlights of my trip. These are the things that came to mind:

I’ve tried to think about the things I’ve learned from the trip. I would not have gone on this trip if I did not think I could do it. I am a generally confident woman with a decent degree of self-awareness. I know that I am the kind of person who can achieve whatever it is I want to. I know I have a strong inner resolve. But I had gone through some bad times in the past few years that made me doubt my abilities sometimes. I needed this trip in order to get my self-confidence back. I’d say it has done the job quite well.

I am proud that I can go on adventures that I organize for myself, minimize the risks, and keep myself safe.

I have learned that there are places in this world that I had not previously considered visiting that turned out to be more beautiful than I could have ever imagined. Poland, Latvia, and Estonia in particular were complete surprises to me. 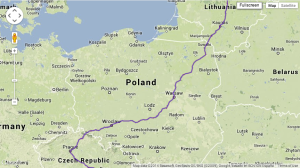 But I think one of the most important things I have learned about this trip is that I am not alone. I have a tendency to feel alone and very lonely at times. My current personal circumstances have placed me in a country where I have no family and friends, spending much of my time in a house that I have played no role in choosing or furnishing. All the while I worry about my own country and feel estranged from so many of my fellow countrymen who seem to have lost all sense and have willingly brought into power a military man who played an intrinsic role in savagely killing Muslim Brotherhood protesters during a sit-in many months ago.

Even though I was physically alone for the majority of my cycle across mainland Europe, I have had so much support and encouragement from my husband, friends, and complete strangers. My mother-in-law e-mailed me almost every other day to make sure all was well. My sister-in-law and brother-in-law and their families skyped me. My husband’s friend Derek, whom I’ve met only once, read my every blog post and sent me regular words of encouragement. Gillian, another of my husband’s childhood friends and a wonderful woman who lives in Scotland, also sent me many words of encouragement throughout. She also sent my husband a summer dress to bring to me when he came to join me so that I could have a girly change of clothes for once. Needless to say, the husband forgot to bring it with him. My own friends living all over the world made me feel like I was a superwoman with superhero friends. Friends whom I haven’t seen for more than 30 years who went to school with me when I was young kept in constant touch through social media. My best friend Arwa “liked” every single blog post I wrote. That little click of a keyboard button made me know she was with me every step of the way. A Spanish science journalist I’ve known for a few years, Merce, kept me informed the whole time I was cycling in Spain with little notes and comments. Her words of encouragement always made me feel very special. I’ve had people get in touch with me privately telling me how my trip was inspiring them in different ways. And then there are the strangers: people I’ve known for years or months or weeks or days through social media but whom I have never had the privilege to meet, people who only started following me on social media after having heard about my trip, and the readers of my blog. I feel grateful to those people above all. Michael Rubenstein, Richard Winter, Judith Marks, PedalWorks, SophieG, Blue Bellbank, Raouf Eldeeb, John Ludwigson, only to mention a few. Their comments made me laugh out loud. Their encouragement was as if from a caring sibling or parent. Their retweets made me feel special. Dalia, an Egyptian woman living in Spain who follows me on Twitter, invited me, a complete stranger, to stay with her in her home when I passed through Barcelona. I decided not to stay in Barcelona that night and instead to camp a bit further along the coast to get more kilometers done that day. But her invitation, her words and the pride she showed in me meant the world. They meant the whole wide world. 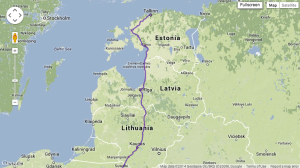 of every single person who sent me words of encouragement and inspiration as I went on an emotional rollercoaster of a journey across a whole continent. Please just know that every comment, like, retweet, page view, Facebook inbox note, and Twitter message is what kept me going. You have all given me a reason to believe that human beings can have genuinely good feelings towards each other despite the differences in place, nationality, religion, ideology, age, background, or whatever. I am a simple, Egyptian, middle-aged mother-of-four who decided to do something just a little bit outlandish. I shared my anxieties, all the thoughts that went running around crazily in my head, my ups, my downs, and my in-betweens with whomever wanted to listen. And in that process I realized I was not alone. Thank you.

I used to read books and watch documentaries and movies about people who went on amazing adventures. I loved imagining myself as part of their stories and travelled along with them in my mind. A few years ago, I decided that there was no reason why I couldn’t live an adventurous life of my own. Life is a gift to be lived, not watched or read about. We can’t always achieve everything we dream of, but there are a whole lot of things we can do. It just needs abundant patience, a little bit of planning, and strong perseverance.  If there is anything you can take from following my journey, I hope that is it.

Finally, I’ve managed to put together the statistics of the trip based on my GPS data. It is not 100% accurate. The first day of the trip was not saved onto my GPS due to a technical issue. The GPS shut down a few times during cycles. The data was saved. But there are small gaps of cycling that happened between the GPS stopping to function and me realizing it and thus restarting the device. Nevertheless, the information below is as close to accurate that I could get based on the data and information I had.

Minimum elevation reached: -51 m (on the coast near Arenzano, Italy)

Most elevation gain in a single day: 1695 m while cycling from Plasencia to Talavera de la Reina, Spain

Most elevation loss in a single day: 1895 m while cycling from Jihlava to Prague, Czech Republic (total elevation gain that day was third highest at 1627 m)

Most calories burned on a single day: 4,572 calories

Personal weight: loss of about 1.5 kg (My goal was to maintain my weight. I am pleased that I only lost 1.5 kg given the number of calories I burned each day and the difficulties I had sometimes finding enough food.)