Listen to your body. I’ve learned that time and again over the years. People about you

will always have brilliant advice on what is good or not for you. They will have objections on your lifestyle. They will tell you what to eat and how to exercise. We all have common sense and most of us already know what is healthy and what is not.

I live what I believe is a generally healthy lifestyle. I listened to my body yesterday and it told me I needed a rest. So I gave it a rest.

This morning my husband and I slept in. What that means is that instead of getting up at 6am we got up at 7am. We ate our breakfast slowly, even though neither of us are ever ones to rush through what we feel is the most important meal of the day. We then spent the morning walking around Riga, Latvia’s capital city, and, because I’m listening to my body, I then took a short but much needed nap.

As a rather frequent traveler, I’m surprised and ashamed about how little to nothing I know about the Baltic states. I am incredibly impressed with Riga. It rivals cities like Vienna and Prague in its architectural beauty, in my opinion, yet if you asked me three months ago what the capital of Latvia was, I’d ask you, “Where the heck is Latvia?”

We’ve had gorgeous sunny weather while here, which has added to the enjoyment of

our visit. The city obviously gets tourists from neighboring countries. The Germans especially seem to get around this region very well. I’ve also seen quite a few Asian tourists. But it isn’t hoarded with tourists the way neighboring capital cities are. That’s nice for a tourist like me who despises crowds of other tourists. But it’s a shame for a city that definitely deserves much more attention than it’s actually getting.

I’ve been very impressed as well while in countries like Slovenia, Poland, the Czech

Republic, Lithuania, and now Latvia, with how easy communication has generally been, even when choosing a random stranger on the street to ask for directions. I’ve found that lots of people speak good English and some who don’t speak English know some German. I’ve used both languages to get by. In Lithuania, most people I spoke with spoke perfect English with an accent bordering on American. Every single restaurant I’ve been to in these countries, even small roadside ones with the exception of one, had English on their menus in addition to the local language. That was not the case in a heavily touristic country like Spain where communication was a major issue for me.

generally has been the wide availability of free Internet connections in every hotel, whatever star-rating, every campsite, and every restaurant no matter how small. Some cities, like Warsaw, even had free wifi city connections you could hook up to while walking about in the city. I spend a lot of time in the UK now. The costs to get an Internet connection while staying at a hotel there are utterly ridiculous.

There are so many places I’ve been to on this trip that I’d like to come back to one day. I’d love to return to Latvia and spend enough time in it to learn more about the people, their culture, and the country’s very very long history. Riga, for instance, was an already well-established trading center during the times of the Vikings in the Middle Ages.

Tomorrow we’re back on the bikes after a much needed rest. I’ve promised my husband 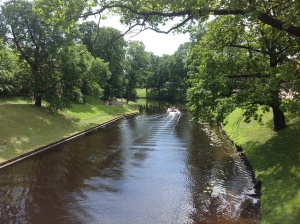 that we’ll be camping! He’s been waiting for this for weeks. Fingers crossed the rains stay away.

As some of you have guessed, this trip is soon winding down to its end. I have probably complained much more than I should have. This has been a most incredible journey. I told my husband that I have been able to find myself on this trip – to feel “home” in a way – so much more than I have felt while at “home” in Egypt or the UK. I find that incredibly sad. With everything happening in Egypt right now, I feel completely alienated from it and my people. In the UK, I have no family or friends or roots or something I have had a role in establishing to feel grounded there. I worry about going back to feeling lost and alone. I will come up with something. I always do. I came up with this trip, didn’t I? There will be lessons for me to reflect on. I’m sure I can figure out, eventually, how to give Nadia the sense of “home” no matter where she lands.