When I grow up, I want to be a Latvian motorcyclist. 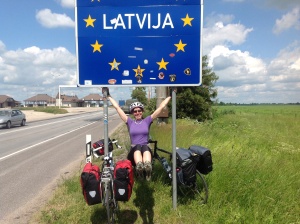 We crossed the border today from Lithuania to Latvia. The 70km ride through northern Lithuania was similar to the past few days: rural. Latvia, on the other hand, almost immediately had a more modern, urban feel to it.

After reviewing our maps, Colin and I found a route that would allow us to get to Riga, Latvia in one 153km-long day instead of my originally planned three shorter days. We decided we would give it a go and if we got too tired midway we’d find a roadside hotel.

It was a whopper. I was fine till kilometer 100. Then a truck passed me way too close. I screamed but kept the bike under control. That episode just took all the energy out of me. We stopped for a big lunch but nothing gave me my energy back. It was a rough 53km until we reached Riga.

Just after we crossed into Latvia and took our commemorative photos at the border sign, we started off on the major road we were on and heard a police siren give an attention signal behind us. I started to pull over, thinking, “This was bound to happen. We’re on a major road. It’s probably illegal for cyclists to use it. To stay out of Latvian jail, Nadia, CRY!”

I looked behind me as I pulled to the side, seeing Colin do the same, and then I saw the 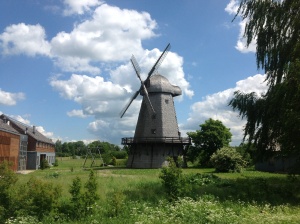 police car passing both of us followed by a row of perhaps ten army trucks. The police car was just warning us to be careful as they passed! Colin and I looked at each other in relief and continued on our way.

Then we started seeing motorcyclists passing in the opposite direction. There were several groups of them over a period of four hours. Several of them gave us big waves. They all looked so cool on their big motorcycles, legs astride, arms held wide, black leather jackets, beards, and helmets. Some groups had a biker with a flag on the back of his bike. I saw the American and Swedish flags. There must have been some sort of an event today that got them all together.

Throughout this trip I’ve felt a sort of kinship with motorcyclists, hikers and walkers, and other bike tourers and road cyclists. They are the unconventional travelers. We recognize and acknowledge each other. There is a sort of understanding between us. We encourage each other to keep being true to ourselves. All that is needed is a wave and all is understood.

I’m getting good vibes from Latvia so far. I’m really liking it. Beautiful people, gorgeous scenery, and Riga’s old city – what I’ve seen of it so far – is romantic.

As we cycled through, we crossed the Daugava River. It reminded me of the Nile in 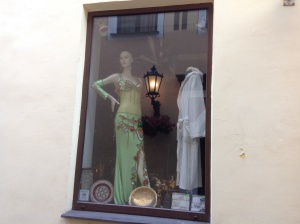 Cairo. There was a little island in the river that reminded me of the island neighborhood of Zamalek in Cairo. Even the bridges reminded me of our bridges. And to top it all off, there is an Egyptian gift shop right in front of our hotel. I swear to God! They sell belly dancer outfits, linens made from Egyptian cotton, and mother-of-pearl jewelry boxes. It almost feels like home minus the horrendous traffic jams and donkey carts.